Like many writers, I’m daunted by the blank screen. When Saturday night rolls around, I’m always convinced that I won’t have a thing to write about. But when you embark on the spiritual path, there is always something nearby that is waiting to teach you. The soul doesn’t like rest.

This week, the lesson concerned my cat, Dorian Gray. Dorian was Bill’s cat. When we adopted him – to scare away mice – I thought he’d be my cat. Bill didn’t especially like cats, but Dorian won his heart. They watched football together.  They took naps together. 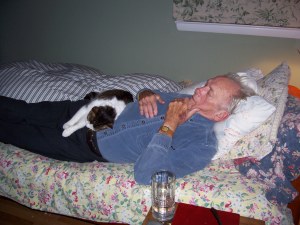 When Bill passed away, Dorian became my little buddy, the little animal soul who stayed to keep me company.  As animals do, he lightened my darkest days.

I think that Dorian is psychically attuned to me. When he stays out past my comfort zone, I go to the window and whisper, “Come home, now, Dorian.” In a few minutes he appears. Every time. We moved to Arizona a few months ago, and Dorian had to get used to new territory, which he did, and new dangers – coyotes and bobcats.  He spends a lot of time in his safe spot – on top of my car. If he’s at a neighbor’s a few doors away, and he sees me, he comes running.  He’s my little buddy. He’s something to take care of. Something to love. Something of Bill’s. So, when Dorian gets sick, I get sick too, in my heart. He’s twelve years old now, and I’m always on alert for anything that might go wrong with him.

All in all, I have a wonderful life. I am living my dream in Sedona, Arizona. It’s nestled in monumental red rock formations and so beautiful I can’t describe it. It’s like living in the Grand Canyon. I’m retired and my time is my own. My job is to write my next book, and I can’t think of anything more wonderful than that. I’m healthy. I’ve made lots of new friends. The weather is spectacular right now. The desert is flowering, and it looks like my version of Heaven.

But. I found a way to be unhappy. Last week, Dorian stopped eating, stopped going outside, and just looked…sad.  I started to worry. I started to imagine the worst. And right then, in my little piece of Paradise, I changed back into the person I thought I had left behind – the one who worried and was always anxious, even after the Universe had lifted me out of grief, despair, and loss, into another state of being. Ah…but as I said, the soul doesn’t like rest. It wants to grow, to continue with the lessons, and as soon as I get comfortable it shows up – in my face.

Dorian doesn’t have anything serious. He does have acne (don’t laugh) on his chin. It’s infected and it’s painful, and it hurts to move his mouth, which is why he stopped eating. The vet cleaned it up and gave me some pads to wipe his chin with every day. And Dorian’s been really good about it. He holds his little chin up for me and I gently wipe it, but last night, when I wiped it, there was blood on the pad. And not a little either. Cats don’t like to show pain. It’s a survival mechanism. Dorian didn’t howl or pull away. But he stayed away from me. He didn’t sleep in my bed like he usually does. He didn’t eat dinner or breakfast. And I cried. I cried because I hurt him, an innocent little animal. I didn’t mean to, but I hurt him anyway. As long as I cried, and hovered, and apologized, Dorian stayed away from me.

And the Universe stepped in with the lesson. In one of the books I was reading, there was a statement that stood out and wouldn’t leave me alone:  It is your thoughts alone that cause you pain. The more I thought about it, the more powerful this idea became. And the more difficult. But there it was.

My situation isn’t dire, but I was feeling more pain than I needed to. I decided to stop indulging in self-pity and fear of losing my little buddy, because that’s all it was. When I stopped my melodrama, Dorian changed. He came in from outside. ( He always cries to come in when I am exactly fifteen minutes into my meditation.) He ate a little. He joined me in the room where I write and fell asleep on the couch, attuned to my “better” energy. His chin has stopped bleeding, and we’re back. We’re friends again. All I have to say to the Universe is…thank you once again. This was a gentle lesson, but I’ll need it again someday.

Read The Messenger: The Improbable Story of a Grieving Mother and a Spirit Guide by Helen Delaney. Find it at www.amazon.com. For a signed copy, go to www.themessenger.space.

2 thoughts on “A Gentle Lesson”