As I backed out of my driveway this morning (on my way to stock up on cat food before the heavy rain hits our peninsula), I saw a piece of siding on the front of my house that had come loose, the result, no doubt, of two days of high winds (a side effect of Hurricane Joaquin). My first exasperated thought was, is this house cursed? Since Bill died, this house has done nothing but demand things from me. For two and a half years, I’ve tried to sell it, but my buyer is still out there somewhere, trying to find me.  I’ve fixed one thing after another. Some things were small; some were major (like the construction of two bathrooms after a leak). Deep in my heart I know that all is well, and that when the time is right, I will move. But there are constant demands. And the unknown stretching out endlessly before me.

All the way to the supermarket, I listed the things in my life for which I should be grateful – my health, my family, my friends, my house, which, in spite of my carping, has withstood several severe storms and two hurricanes over the last thirteen years.

I shopped, I remembered to be grateful, but I was still annoyed. As I was bringing my grocery bags into the house, I looked up at the piece of loose siding, dangling precariously. My first thought was to ignore it, let it hang there till I was ready to deal with it. But then I envisioned the next few days: the piece of siding blown away in the wind, the call to a contractor, the wait for him to show up. The money. A replacement piece wouldn’t match so I’d have to paint the front of the house, then I’d have to paint the whole house. And I’m about to take on a new real estate agent, and hopefully, a new set of prospective buyers. The house has to be turnkey-ready.  This train of thought went on and on into a homeowner’s nightmare. I decided to fix it. I’m no handywoman, but I do have a ladder and a brand new bottle of gorilla glue. (A brilliant solution, right?) I positioned the ladder carefully behind my Montauk daisies, which are blooming prettily, steadied it as best I could in the wind and started to ascend, when I heard a voice: “Helen! What are you doing?” It was my neighbor Jeff, who had just pulled into his driveway. “Give me a minute to put my groceries in the house,” he said.

Jeff, who knows his way around a power drill, ascended the ladder while I held it steady. As he secured the siding with screws (and made the repair invisible, by the way), I complained. “It’s always something with this house.” And he said, “There’s always something with old houses.” It was so matter-of-fact, so calm. With just those few words, he put everything into perspective. My house isn’t cursed. It’s old. Ah, but there’s this: Who put Jeff in his driveway just as I was starting up the ladder? Who gave me his sweet little family to live next door to?

It’s nighttime, and I’m sitting in front of my computer, listening to the wind howl, happy to be inside and sheltered. There are people who have lost their houses to this hurricane, people who have lost their lives. A ship is lost at sea. I’ve lived through hurricanes in my life, some of them having nothing to do with the weather. So I thank this old house, my teacher, for dropping something out of place so that I might be reminded that I have always been held in safety and lifted above every storm. And that I am not alone.

Next week, I’ll catch up and tell you about business dinners with old friends, a birthday party, a book club that read The Messenger, a visit with my daughter Niki, and my daughter Michaela’s speech to Gate Scholars, an amazing story that brought tears to my eyes. 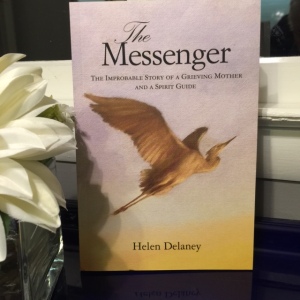 The Messenger: The Improbable Story of a Grieving Mother and a Spirit Guide, by Helen Delaney is available on http://www.Amazon.com and at the News Center in Easton, MD.